Keywords: electrochemical sensors, electrochemical impedance microscopy, aptamer, intercalators, illicit drugs, sewage biomarkers, wastewater-based epidemiology;  ​
​
We aim to develop multichannel biosensors for human biomarker detection. We have proposed for the first of time, the concept of community sewage sensors for the detection of sewage biomarkers for monitoring public health via wastewater-based epidemiology (WBE), due to its rapid response times, low cost and minimal sample processing.
​
​A range of community sewage sensors (arrays) were designed to detect sewage  urinary biomarkers for monitoring of public health within WBE, such as mitochondrial DNA, proteins (e.g. prostatic specific antigen), and drugs (e.g. cocaine) in sewage for monitoring of public health. In particular, a new label-free electrochemical DNA (E-DNA) biosensor was developed, utilizing a custom synthesized ferrocenyl intercalator as a transducer, which allows the detection of human-specific mitochondrial DNA in sewage. This novel community sensors could be used to identify potential population biomarkers for the monitoring of public health using WBE. Moreover, a novel immobilization strategy using DNA-directed immobilization for impedimetric aptamer sensor was developed for rapid detection of cocaine applied to weekly wastewater monitoring, coupled with a simple sample pre-concentration step. The analysis of cocaine in wastewater from weekly sampling in treatment plant shows similar cocaine use trends from that analysed with mass spectrometry, indicating that the developed cocaine sensors have the potential to evaluate illicit drug use trends but with rapid response times, low cost, and even monitoring in the field. The community sewage sensors were employed for the detection of a prostate cancer biomarker (PSA) in sewage based on DNA-directed immobilization aptamer sensors, which could be potentially used to evaluate the cancer prevalence at the local population level. This work demonstrated that community sewage sensors have the clear potential to provide real-time data for the assessment of community-wide health by assessment of biomarkers of health and diseases at a population level. 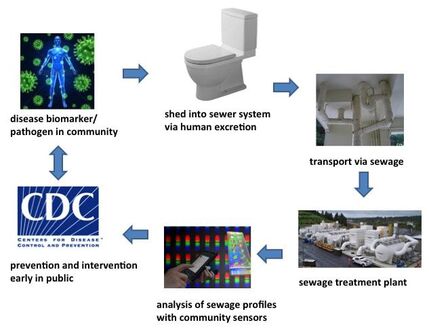